109 The six lessons I’d teach my younger self 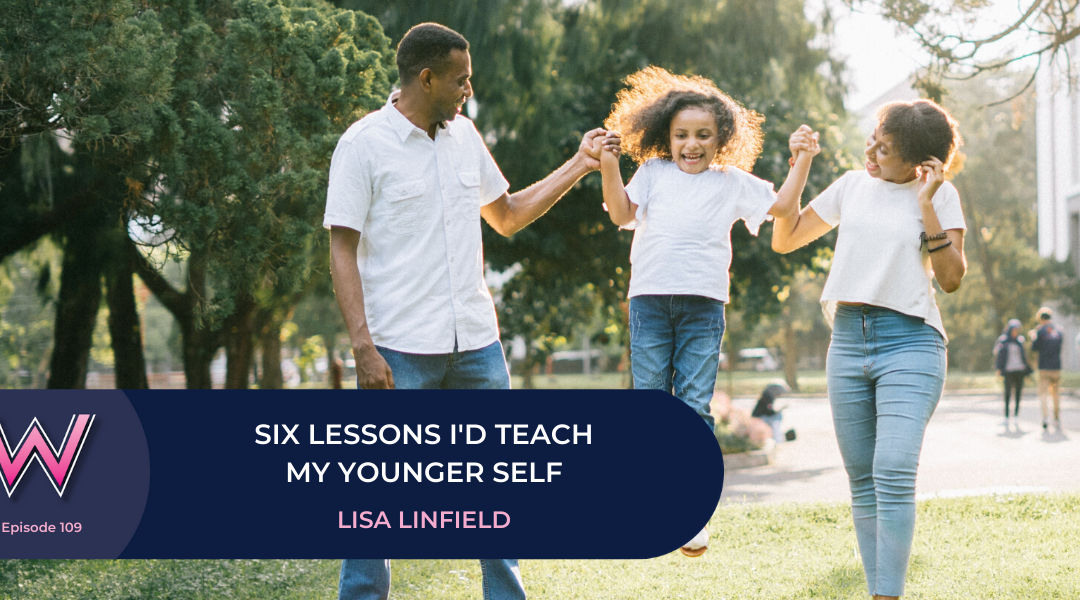 Are you in debt? Have you saved for your retirement? Do you find yourself making purchases to ‘keep up with Joneses’? What would you have done differently if you had known more about money earlier in life?

The truth is, even though it’s easier to form good money habits when you’re younger, it’s never too late!

In today’s episode I talk about the six lessons I’d teach my younger self about money, things I wish that I’d known back then.

The six lessons I’d teach my younger self:

Listen to the episode, then take these lessons I’d teach my younger self and implement them. And then teach them to your children.  Even children of a fairly young age can grasp the concept of having choices. Being financial free gives you the power of choice. They already have the power of time.

“So much of our actions to please The World Out There are done for people they will not see in five years time, let alone when they’re retired in fifty years.” – Lisa Linfield

“If I knew what I know now, I would have saved 20-30% of everything I earned from when I first started working” – Lisa Linfield

What I love about them is that we don’t need to dwell on debt because that’s a bad thing and they will never ever get into debt, obviously. Cue rolling eyeballs and huffing whilst I try and teach them about that. I also don’t need to teach them about the power of compound interest because that’s just boring maths, and you know, we’ve all done our maths exams and don’t need to learn about it. So many people berate the lack of financial education in school. But when I teach in high school, I also do realize how important real life experience is in truly absorbing information.

A little like when Ivy League Universities require you to have 10 years of business experience before doing their MBA. It’s vitally important that we do teach kids more about money, but there are some things they will only truly appreciate when they’re having to make the trade off decisions themselves. As I sat to write their talk, I thought about the lessons I wish I had known back then. Some I’ve learned through the hard knocks of life. Some my mom and dad taught me, and some, well, but for the grace of God, would my life have turned out a lot less wonderful than it has been.

The first lesson is to understand the difference between rich and wealthy. Rich is what I call “show and tell.” The things we feel we just have to have, the latest iPhone, when we could get by with a phone the quarter of the price. A fancy car, when a simple one will do just fine. A huge house, when the costs of running it are twice as much than that of a small house. The girls very quickly got the difference and knew exactly how relevant it was to them right now when we discussed phones as an example. They all answered that the reason they need the latest phones was that everybody else had it, and then peer pressure meant that they felt it was crucial.

One of the concepts I drummed into them was that wealthy people had assets that generated an income, so the house you live in or the car that you thought was an asset can actually not be considered an asset because they don’t generate income. Yes, over a very long time, your home may increase in value, but it doesn’t generate income whilst you’re living in it unless you rent it out. So the less you spend on non-income generating assets, the better. I mentioned to those girls that they could save the difference every single month between the expensive phone and the non-expensive phone, and as you can imagine, they were quite a few eyeballs rolled.

The second lesson is related to that one. You need to be very clear of your why. Why are you risking the scorn of your friends or social group now to save this money? I taught those goals that so much of our actions to please the world out there are done for people they will not see in five years time, let alone when they’re retired in 50 years. So they’re trying to impress people who will mean absolutely nothing to them in just a short while.

We then discussed the vision of being able to retire when you’re 30 or 40, of being able to choose whether or not you wanted to work. Even if they’re young age, they grasped the power of that concept of choice. There’s a quote I love from my absolute favorite textbook of wealth, The Millionaire Next Door, by Thomas J Stanley. Having spent his entire career starting wealthy dollar millionaires, he concluded wealth is more often the result of a lifestyle of hard work, perseverance, planning, and most of all, self-discipline every single day. It’s exactly like your health, never too late to start, but ideal to have worked on it through every day of your life.

The third lesson I shared with them is that the most important time for creating wealth is in your 20s. For this, there are so many math sums that’ll show you that if you invest between 20 and 30, you can save a third less than if you only saved between 30 and 60. But I think what struck the most was when I shared with them that 65% of John and my wealth was from before the age of 30. We discussed that whilst it wasn’t the highest earning part of your career, in fact, most of us started at the bottom and earned very little, what it did have in its favor was time, the time to compound or earn free money on free money. It just stayed invested, kept generating an income that got reinvested and had the time to repeat this process over and over thanks to that wonderful power of compound interest.

What truly differentiated John and I was one of those gifts from God. When we left the UK for South Africa, we decided to leave everything in the UK. It meant that we found ourselves at the age of 30, newly married, and not having much to live on. Our friends were starting to drive fancy cars and do fancy things for their anniversaries. We spent our first anniversary at a weekend special for a corporate conference facility that wasn’t occupied on weekends. My first Christmas, I received a tow rope, a warning hazard, and jumper cables for my little car. But what it did mean is that our first flat became an investment property, and we didn’t sell it and roll that cash into a bigger place. That was literally the key for everything for us. The other thing that investing in your twenties does is forces you to create good habits. It’s easier to form good money habits and keep them from when you’re young, but excruciatingly difficult to try and implement lifestyle changes when you’re 40 or older.

The next lesson related to that and is around never cash in your pension money. This is one that both John and I learned from our parents. As a result, our tiny little pensions from before we were 30 were left fully invested in UK and global shares for the last 15 years. As a result, they’re a sizable chunk of our funds. If we’d cashed them in in order to live a nicer life when we started out in South Africa in our thirties, we would have been so much worse off. And both of us took the maximum amount we could save when offered to us when we were working, and not that easy option of a low amount of pension saving now in order that we would have more money now, but struggle later.

The fifth lesson is on the power of small amounts over a long time. I asked the girls how important they thought investing just 200 grand would be for their future wealth, the buying equivalent of $20. And all agreed, not very important. But then I showed them the power of time, that if they invested 200 grand in a stock exchange tracker or index fund from the age of 20 to the age of 65 they would have 3.2 million, or $320,000, when they retired. If they added just five years to that, starting at 15, it would be worth 5.7 million, or $570,000. The class just erupted in shock. But it’s right, small amounts invested over a long time result in huge amounts at retirement. We absolutely discussed the risks of investing in a stock exchange tracker or index for short periods like a year or three, but that, at their age of between 14 and 17 years old, the thing that they could possibly do is just consistently invest.

What starting young does is teaches you how to automate investing. Their parents will help them set it up, but from the age they start onwards, they will always have an investment account with an automated payment. When I told them that my twins, at their seventh birthday, had asked for money for an investment account. The penny dropped, that instead of buying junk, they could put additional lump sums of money into it.

The last lesson I taught them was on the power of earning an extra income. So many people focus on having to cut money to invest or save, but for me, it’s far easier to hold your expenses flat and make more money. Get a side hustle and commit all the money you make to your investments. The girls were horrified to learn that I started working at 10 years old, and that I’d worked ever since then. But I shared with them that I had the most disposable cash ever at university because I worked, but only had to look after myself and nobody else.

I taught them about the ultimate university job, babysitting, which allowed me to get paid to study for my medical school exams whilst the little puppet slipped. If I knew what I knew now, I would have saved 20 to 30% of everything I earned from when I first started working. Just think where I’d be now. As Warren Buffett says, the best time to invest was in your twenties. The second best time is today. Go take these lessons, teach them to your kids and make sure you implement them yourself, even if it’s just saving the tiniest amount every single month. Please do head to my website, workingwomenswealth.com, and sign up for our newsletter. I’d love to get to know you better and share with you my learnings as we journey together. I’m Lisa Linfield, and this is Working Women’s Wealth. Have a great week.