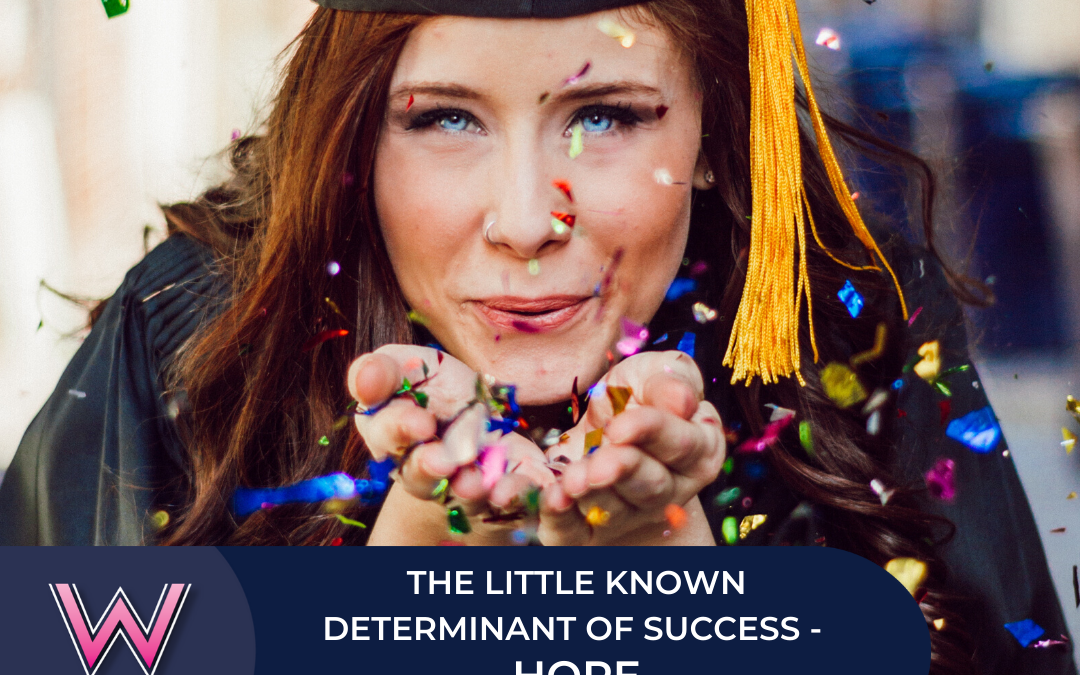 Are your goals and dreams feeling a little out of reach in the present climate? Or does a recent failure (or series of them) have you ready to throw in the towel? Before you do, think about this…

One of the highest determinants of success is HOPE.

Broadly defined as “the overall perception that goals can be met”, there are things that you can do to reignite the flame of hope. In short, believe that you can, and that, because you’re resourceful, you’ll find a way.

So if you’ve lost hope (and to be honest, I think all of us need a dose of it right now), ask yourself this: “has someone, somewhere been able to do this?” If the answer is yes, then you need to know deeply, with every fibre of your being, that it is possible to achieve it – and focus on that.

[00.49] – Whilst research for my new book (due for release later this year), one of the most amazing things that I discovered is that one of the highest determinants of success is hope.

[01.40] – How crashing to rock bottom in my career revealed the importance of hope.

[03.15] – Hope Theory (based on the work of Rick Snyder) and the key ingredients necessary for hope to be active.

[04.37] – Putting it into practice. Be inspired by the story of Sir Nicholas Winton! He said: “I work on the motto that if something is not impossible, there must be a way of doing it.”[1]

If you’re looking for a supportive community that’ll help you pick yourself up when things don’t go your way, join my Brave to Be Free Facebook group.

“Something about losing hope felt dark, claustrophobic, like I just wanted to gasp for breath.” – Lisa Linfield

“Has someone in a similar or lesser circumstance ever achieved what you want to do?” – Lisa Linfield

“But I keep saying – someone, somewhere has done this… so it’s possible and I can find a way.” – Lisa Linfield

Hello everybody, and welcome to today’s episode of Working Women’s Wealth.
I’d like to start by inviting you to join our community in our Brave to be Free Facebook group. It’s a place where we can share our journey’s to become The Brave Women we were created to be. Just go to our Facebook Page, Working Women’s Wealth, and join the group there, or search Brave to be Free on Facebook.
I’m on the second last stage of the book editing process – where I’ve received my book in a PDF format, like a book. I can’t wait for it to come out – probably around July – as I’m hoping it will strengthen all those who read it, and give them a renewed sense of Hope.
Today I was reviewing the section on Hope, and I thought I’d share some of it with you.
One of the most amazing things I’ve discovered in my research is that one of the highest determinants of success is hope. Not IQ, hope. For me, hope was one of those cheesy words that were carved into wood, whitewash painted, and nailed to walls in homes. I truly never understood people’s obsession with it. On reflection, I guess that’s because I always naturally felt that I owned all my goals, and that with enough work and effort, I would be able to find a path to achieve anything.
At least, I felt that way until my early 30s.
I had had a great career up until then, and I was on a high flier program and doing really well in my career. Then, the CEO changed, and I experienced a fateful out-of-control two years, eventually crashing to rock bottom in my career.
For the first time in my life, I’d been on the wrong side of those in power. And for the first time in my life, I felt I had no hope. As someone who had never before experienced that, it was completely foreign, and to be honest, it was completely scary. Something about losing hope felt dark, claustrophobic, like I just wanted to gasp for breath. Shame in stereo drowned out any Still Small Voice of strength and hope. I had low energy and no sense of purpose.

Hope Theory
One of the rocks on which Hope Theory is built is a man called Rick Snyder. If hope is broadly defined in the research as “the overall perception that goals can be met”, Rick built on that definition and his earlier work to give us the key ingredients as to how and why Hope is a powerful driver of our success.
He identified two key ingredients for hope to be active
• The first principle is agency—or the belief that I personally own the goals, and I have the opportunity to direct the successful outcome (e.g., it’s not a goal I’ve been given by someone else with no way on earth of ever achieving it).
• The second principle is our ability to find successful pathways to achieve our goals.
So the more we own our goals and believe that we can find a path to achieve our goals, the more hope we will have of achieving those goals.

Putting it in practice
So coming back to my story, when the new MD of the business decided I wasn’t her cup of Darjeeling tea – in the beginning, it didn’t matter how hard I worked, I couldn’t change her mind. So when it came to having hope for my career under her leadership, I felt I neither had the ability to control my career (agency), nor did I have the way to find successful pathways to getting my career on track (ability). She was the giver and taker of jobs, and therefore careers, and her view of my future career and hers were worlds apart.

Understanding what I know now about Snyder’s work, I can totally see why I lost all sense of hope.

My biggest inspiration story is from Sir Nicholas Winton. From 1938 to 1939, he saved the lives of 669 children from the Holocaust, organising and paying for seven trains to evacuate the children from Czechoslovakia before the war began and Hitler shut the boarders, closing the route through Germany to England. He kept quiet about it for fifty years, not even telling his wife, because he felt it was of no value. To be fair, I think many people who survived the trauma of the war shut down those parts of them that were too hurtful to deal with.
To cut an amazing story short, when cleaning the attic fifty years later, his wife found a book detailing each child’s journey. Whilst Nicholas believed no good would come from following up on the children, she argued that it wasn’t only his story but also the children’s story, and they had a right to know the truth about their history.
And so unravelled a sequence of events that surfaced the story, a story that has impacted the more than 6,000 descendants of those children whose lives he saved. In a surprise organised by the BBC, he got to meet many of those children for the first time. When asked how, with no training or infrastructure, he paid the fifty-pound bond the government required at the time to let them into the UK and personally organised a host family for each one of the children, he replied,
“I work on the motto that if something is not impossible, there must be a way of doing it.”

Probable or Possible
In episode 41, I interviewed Gloria Mitchell. She explained a concept to me that truly blew me away. She has a remarkable story, encapsulated in the fact that she was homeless with no university degree at the age of twenty and went on to achieve a Stanford MBA and so much in her life.
The big Ah-Ha for me came in our discussion on the difference between elite performers and everybody else. “No one reaches the highest level of success by focusing on the probability of it; they focus on the possibility. Is it possible? And if it’s possible, they figure out a way to make it happen.” Sir Nicholas Winton was living proof of that—if it is possible, there must be a way.
So I ask the people who take my course, “Brave to Be Free” to answer one clear question: has someone in a similar or lesser circumstance ever achieved what you want to do? And if they have (which almost always someone somewhere in the world has), then they need to know deeply with every fibre of your being that it is possible to achieve it—and focus on that.

The liberating hope of a vision
As you all know, my goal is to teach 1 million women how to live their best life, and how to enable it by being better at making money, investing it and protecting it. With time, I don’t have a doubt in my mind that I will achieve it. Many people all over the world have reached the target of teaching a million people with the gift of the online world.
When I look at Professor Snydor’s ingredients of hope, I see that I own it, no one else does, and no one else is making me do this. I also know that I can find a way to make it happen—that through the books I will write, the talks I will give, and the courses I will teach, at some stage I will hit a million women.
And so it fills me with great hope. It also fills me with a strong vision. And, it supports resilience. That when things I try fail spectacularly, I ask myself, “has someone, somewhere been able to do this”. And if they have, I pick myself up and get back to finding someone who can teach me how to do it.
My podcast has nowhere near the listeners I want to make a dent in the world. And, I believe with all my heart that my Side Hustle course can dramatically change the lives of people who want to start a business but don’t know where to start. But it still hasn’t reached the sales success that will enable a deep step change in the world’s financial affairs of women. And so many times I want to give up.
But I keep saying – someone, somewhere has done this… so it’s possible. I can find a way.
Right now, all of us need a dose of hope – one of the key features of success.
We just need keep breaking it down into Professor Snyder’s ingredients of hope: believe deeply that you can, and you’ll find a way.
So if you want to join a supportive community that’ll help you pick yourself up when things don’t go your way, please do join the Brave to be Free community on Facebook by going to the Working Women’s Wealth Facebook page and clicking on Groups…or searching Brave to be Free on Facebook.
Take care and have a brave, hopeful week. I’m Lisa Linfield, and this is Working Women’s Wealth.

Get on the Waitlist for my March Course on Debt