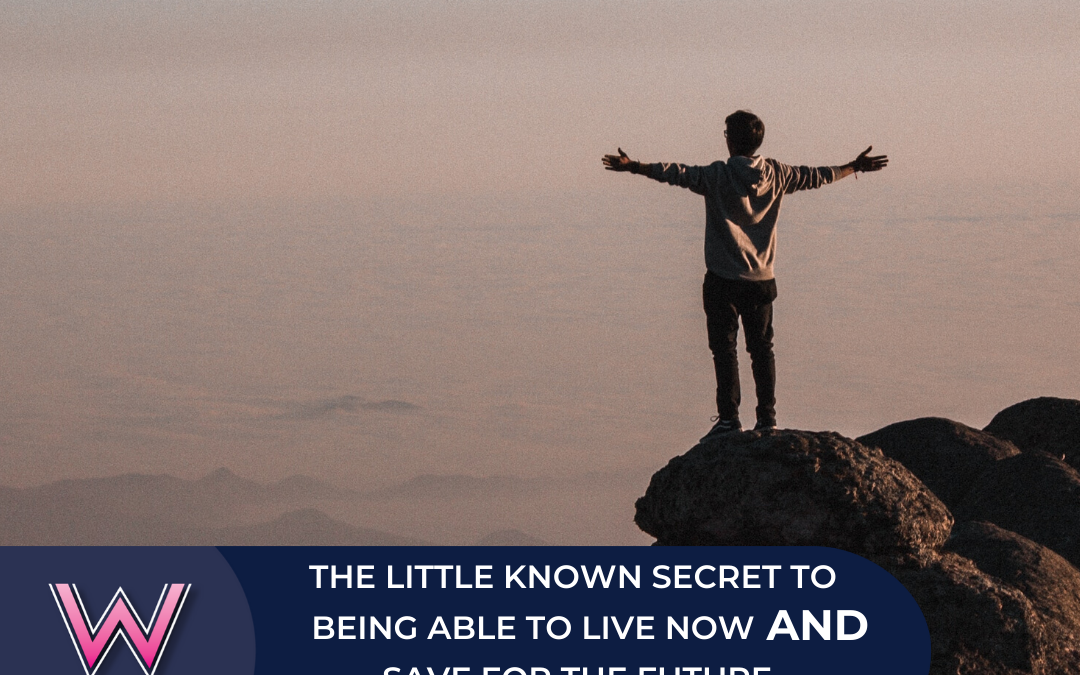 You know it’s important to save, but there’s always SOMETHING vying for your hard earned cash. So you have choices – spend or save? Live now OR save for the future? But what if there was a way to do both?

There is! It’s called Trading Back, and it enables you to have a little bit of the AND.

In today’s episode I reveal how to utilise this secret to enable you to both live now AND save for the future.

[01.24] The secret? Trading Back. And the two key principles it comes down to:

[03.25] Real life examples of how to trade back (and the importance of making SMALL shifts)

It all comes down to making conscious choices, for without them, you will wake up and not have the time or the ability to improve your life.

Lisa Linfield:                       00:21                     Hello everybody and welcome to today’s episode of Working Women’s Wealth. I’m going to teach you about the little known secret to both living life now and saving for later. I mentioned in my episode two weeks ago, the six lessons I teach my younger self that I just had the privilege of teaching grade eight to 11s about money as part of my goal to teach 1 million women how to live their best life and look after their money. Having gone through the money lessons, one of the 16-year-olds asked me a question I get asked quite often, “How do we balance the desire to live our best lives now and save for the future?” It’s a great question at any stage, but when she asked it, I knew that there was a sincerity in her question that reflected that she had both deeply engaged with the lessons I taught and concluded that whilst I was right, she still wanted to live now. Trading back, that’s the secret.

Now she probably looked at me the exact same way you’re looking right now, what? What is trading back and how on earth can that be the secret to living now and saving for the future? You see, it all comes down to two key principles. What’s important to you and the finiteness of money.

Let’s start at the second principle. Money is finite. Here’s the thing. In the moment, it can be used for only one thing at a time. Either you will spend it or you will save it. You can’t do both. It’s as simple as that. If you choose to invest it, over time, it can infinitely grow more money almost. But your first choice is to either spend it or save it before you can invest it.

Let’s look at the next principle, what’s important to you. I once heard an excellent money tip, which was to go through your statement and look at what your spending was telling you about what you value. Some things are easier to see. If you’re buying fast food every day, you’re valuing convenience and laziness above vacations and a financially secure future, but some are more difficult and definitely not as black and white. If you’re spending every cent on your children, you’re valuing their now above your future security, potentially putting them in the position to have to pay for your retirement instead of spending their money on educating your grandchildren. I’ve always said that money expresses you, your values and your relationships, and none of these decisions aren’t easy, but trading down enables you to have a little bit of the end.

This week I was taking an Uber, which if I have the energy, always presents an opportunity for me to quickly teach someone about money. I asked my driver whether he owned his car or was a paid driver. He laughed and told me that there was no way he would ever have enough money to own his own car. So I asked him how often he ate out at KFC or Nando’s or McDonald’s or any other such place. “Every day,” he answered. He was horrified when I told him that our family eats out only on special occasions. Now, I know this is one of the biggest places many people spend their money and it therefore offers an easy lesson on trading down. It’s easy to tell people that, no, they must now start packing their own lunch, but once that is the cheapest answer, it’s often not going to gain traction longterm. I believe you actually need to make small shifts.

When I taught the teenage girls, the easiest example was cell phones and expensive cell phone can do the exact same thing as one half or quarter of the price. And when it comes to cars, the differences are even bigger. My girls and I have a concept of worth it when it comes to unhealthy things. For me, ice cream is always worth it, but jelly sweets are never. When it comes to spending money, the concept is similar. It comes down to what you value. For some, an expensive car is truly worth it for them. For me, I’m not a car person and I thank God every day for that, but I just see a car as swirling holidays I’d rather be spending with my family in both interest and maintenance payments. Phones to me aren’t worth it, but experiences are. So I spend my money on experiences.

John and I are currently planning a trip to take our girls to see Disneyland Paris. As we debate the options, we’re considering accommodation choices of being in the park versus staying in Paris. As we sourced feedback from our friends, they reflect this very point. For some, staying in the park was definitely not worth it. It’s way cheaper to stay in Paris, easy to take the train out, but for others they think it’s worth every single cent and then some to be able to attend the night show and be right there and allow the kids to have an afternoon nap if they need it. Trading back could be instead of too expensive holidays, you do one and have a cheaper local staycation. Or it could be instead of buying fizzy drinks, you buy cordial or juice concentrations that you mix with water. But money is finite, you can’t have the best of everything and still save. You have to decide what’s worth it and what isn’t and then cut back on those things that aren’t.

My Uber driver totally bought in that it was worth it to him to have his KFC purchases and to save the rest. He wanted the freedom of being his own boss and owning his own car. I totally think that driving my tiny car is worth the joy in my little girl’s face when they get to see Disneyland. For my ever-growing children, hand-me-down clothes are the best gift for all of us. They think it’s so cool to wear someone older than theirs clothes, and I just love how much I’m saving, but I know that there are other people who would rather die than have hand-me-downs.

Each of us have our own worth it category. The only thing you really need to think deeply about is unintended consequences and implicit assumptions. Implicit assumptions are what you need to dig deep for in your thinking to find. A few episodes back, I taught you about my secret of the five whiskies and Heineken taste. Five whys and a how. To keep asking yourself at least six times questions like, “Why? How? What? What made me think?”

For most people an implicit assumption is that it doesn’t matter if they’re not saving now, they’ll start saving once their children finish school. That assumes firstly, that you’ll be able to cut your expenses by enough to do that. Secondly, that you’ll have enough time. And lastly, that you’ll still be in a job that pays you enough then. My general experience is that because people have been having children later, they only stop university fees in their late 50s, hold onto the family home for far too long and so don’t downscale expenses and get forced to retire at 60. Meaning they can’t fulfill that assumption. The main point though is this, be conscious of your assumptions and actively debate them. Nothing is right or wrong. It’s just being conscious of the choices you make and the assumptions that underpin them.

Lastly, that other part was unintended consequences. I mentioned it briefly earlier. The biggest one I watch is the concept of sacrificing everything so our kids get the based. This is a totally noble endeavor and I totally understand it, but it does have unintended consequences that each one of us needs to think about. Overspending on kids now or supporting them financially long after you should have stopped results in the kids needing to pay for you in retirement if you haven’t saved enough. If given the choice, they may have chosen to have fewer things, but have you saved more?

So one of the best tips I can give you to live now and save for the future is to trade back on things that aren’t very important to you. Things that don’t fit in the worth it category. Spend money on those that are, but be conscious of trading back on the unimportant stuff. Just make sure that you are disciplined to save the money and not spend it. Otherwise, all you’re doing is shifting the money from something that’s not worth it to something that is also not worth it. And know deeply what your assumptions and your unintended consequences may be for each of your decisions. Living a conscious, mindful life is one of the best things that we possibly can do to make sure that our money stretches further than it ever will. Because without those conscious decisions, we will wake up and not have the time or the ability to make other decisions to improve our lives.

Please do hit to my website workingwomenswealth.com and sign up for our newsletter. I’d really love to get to know you better and would also love to share my learnings as we both journey along this road of living our best lives. I’m Lisa Linfield. This is Working Women’s Wealth. Have a great week.