Courage: The choice of action despite fear 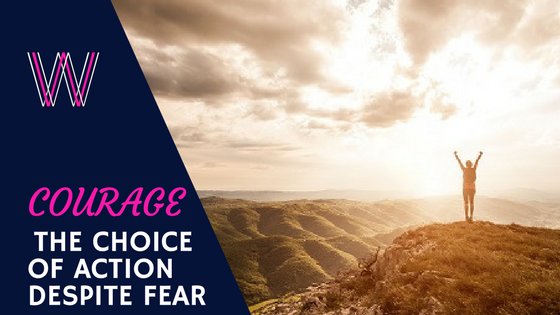 This is part of the Brave to be Free series

Fear of Failure.  Fear of Success.  Fear of being seen as a fraud.  What if people don’t like me?  What if no one likes this?

Followed by excuses. So many of them.

For me personally, there were many excuses as to why I shouldn’t start Working Women’s Wealth.   The South African Podcast market is so small.  It’s way too early to do it.  I’m starting a new business, I should just focus on that.  Nobody will like it, nobody will listen, everyone will think it’s useless.  And who am I to do a podcast?  I have no experience in broadcasting?  The list goes on as to why doing my blog and podcast was a bad idea.

I’d been following Pat Flynn and his blog and podcast for a few years.  I’d listened to the stories of people taking his advice, doing his courses and building their own online businesses.  But I’d never taken action.  I’d even signed up and paid a lot of money for his podcasting course.  You see, I knew that if I wanted to reach my goal of teaching one million women about money, I couldn’t do it one on one.  If I did it from the age of 42 to 75, I’d need to teach 30,303 women per year.  Slightly difficult.  Therefore I needed to use different channels, and blogs, videos and podcasts would be the way to do it.

So I needed to take action

And that’s where the problem lay.  Those fears can paralyse you.  The excuses can be so real.

The answer lies in the equation

Courage… it’s what drives action.  There are so many definitions and sayings on it, but here are a few I love

They all talk of key concepts that helped me make my own definition for the Brave to be Free series:  the choice of action, despite fear.

On my laptop I have a ‘sticky note’ with the saying:  Every time you choose to do the easy thing, instead of the right thing, you are shaping your identity, becoming the type of person who does what’s easy, rather than what’s right.

One of the key characteristics of people who are successful is that they take accountability for their choices in life.  They look at their part in every decision, every circumstance, every issue.  Because only when you accept your own part in the choices you make in life, can you change your life and make different choices in it.

Courage chooses to act, despite fear

It’s a doing word.  You need to do something.  The result of fear is often doing nothing.  And the less you do, the smaller your circle of influence is.

I love Stephen Covey’s analogy that the space shuttle uses most of its energy as it leaves the earth’s atmosphere.  Those first steps of action will take more energy to fight inertia (doing nothing) than any of the following actions will.

And boy I can attest to that.  What it took me to record my first four episodes to launch my podcast was WAY more effort than my subsequent 14 episodes have been.  Because the biggest battle in life is the battle of the mind.  And all my energy went to fighting my deep desire to just not start this.  To stay comfy on the couch.

I often call on the image of a swan with my friends.  The goal is to act in such a way that on the surface you look like you’re moving with grace and ease.  Yet underneath, you may be paddling like mad.  Those first few episodes were beyond terrifying.  Yet many people say I sounded like I’d being doing it for a while (I have a great editor!!!)

Courage chooses to act, despite fear

Fear grips us all.  Every single one of us.  And like most energies in this world, we all tend to chaos.  The chaos that fear causes in each of our lives.  All of us were born to make a great contribution to the world.  Yet our fears cause each one of us to reach so little of our potential.

We all have it.  When I launched my podcast and videos, all that came hugely into focus.  I don’t think I’ve ever felt so insecure and exposed in my life.

But courage chooses to act, despite fear.

So the key to living your best life is to have courage.  Act.  Despite fear.  Choose a bigger life.  And win the battle of your mind.